By simply searching the internet, you can find countless descriptions of iaido, its origin, and philosophy. I've found that the Wikipedia definition is about as good as any relating to the basic concept of iaido. Below are some of the key concepts from that and other sources.

Iaido (居合道 iaido) is a sword-based Japanese martial art that trains the motions associated with drawing a katana (刀) from its sheath, striking an opponent, removing blood from the blade, and then re-sheathing the katana with smooth, controlled movement. Modern day exponents typically use iaito instead of shinken at least in beginning stages of study. Using a shinken becomes required for advancing to higher ranks within the kendo federation.

Iaido is often confused with both kendo (剣道), kenjutsu and battojutsu (抜刀術). While all three are martial arts involving the Japanese sword, they differ in focus and methodology. Iaido can be described as a specialized version of kenjutsu which specializes in dominating the first few moments of combat, before the swords have even been drawn. Battojutsu focuses on cutting technique using bamboo or tatami targets. Kendo, as an art, is not interested in drawing/sheathing since the shinai uses no scabbard, and adds a sporting aspect over the other two arts. Furthermore, Musonshindenryu iaido is performed individually against one or more imaginary opponents in pre-arranged situations (kata) and with a metal blade, while kendo is meant to be done in pairs and since there is free, full contact sparring, a flexible bamboo sword and protective armor are needed. Kenjutsu, which primarily uses a bokuto for practice, is also executed in the form of kata but in pairs, and does not draw or re-sheath. There are some Musoshindenryu and Muso Jikiden Eishin ryu kata, "Tachi-uchi no kurai," which is a paired set of kata using bokuto with saya and is similar to the kendo kata.

The primary emphasis of iaido is on the psychological state of being aware. The secondary emphasis is on drawing the sword and responding to the sudden attack as quickly as possible. Starting positions can be from combative postures or from everyday sitting or standing positions. The ability to react quickly from different starting positions was considered essential for a samurai (侍).

The Tenshin Shoden Katori Shinto ryu included iaijutsu in its curriculum in 15th century, and first schools dedicated exclusively to sword drawing appeared some time during the late 16th or early 17th century. Most modern schools consider a samurai called Hayashizaki Jinsuke Minamoto no Shigenobu (1546-1621) as the originator of iaido. Not much is known about his life, and some scholars doubt his existence as a historical figure. The two largest schools of iaido that are practiced today, Muso Shinden ryu (夢想神伝流) and Muso Jikiden Eishin ryu (無雙直傳英信流), both claim a lineage starting with Hayashizaki Jinsuke Shigenobu (林崎甚助重信).

The two main classical styles (koryu) of iaido practiced worldwide are Muso Jikiden Eishin-ryu and Muso Shinden-ryu. They resemble each other quite strongly because they branched off from one style sometime in the 18th century, under Oguro Motouemon Kiyakatsu sensei. After Oguro, there came into being two branches that were formed on philosophical differences between two students of Oguro: The Shimomura-ha and Tanimura-ha (branches), the former being headed by Maysuyori Teisuke Hisanari and the latter by Matsuyoshi Teisuke (Shinsuke) Hisanari, who became the 12th grandmaster. 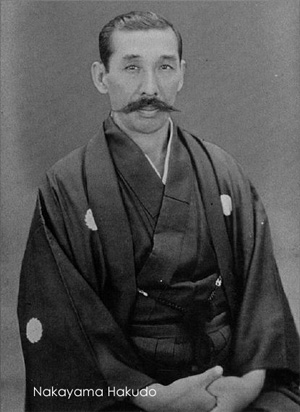 These two branches would co-exist for many years until Muso Jikiden Eishin Ryu officially came into being in the early 20th century through the initiative of Oe Masamichi Shikei, the 17th headmaster of the Jikiden Eishin Ryu. Oe would bring together the Tanimura-ha, Hasegawa Eishin Ryu and the Omori Ryu to form what is today's Muso Jikden Eishin Ryu.

The Shimomura-ha held its own headmasters and philosophy for many years but would eventually fade away. The last Shimomura-ha (claimed) headmaster, Nakayama Hakudo who is considered the 16th, created a new iai-art called Muso Shinden Battojutsu that was heavily influenced by his Shimomura-ha training, but also took elements from other iai-arts. Nakayama Hakudo is not known to have taught the "pure" Shimomura-ha teachings in it's complete form to any of his students and thus it can be argued that Shimomura-ha does not longer exist as a separate entity, even though elements of it remain in what would later become the modern Muso Shinden-ryu.

One of the differences between the two schools can be seen in the noto (sheathing the katana back in the saya). In Muso Shinden, noto is done on the horizontal plane, with the blade parallel to the floor. In Jikiden, the blade is perpendicular to the floor in a more or less vertical plane.

There are several lines of transmission extant for Muso Shinden ryu also. One of them claims Mitsuzuka Takeshi as the soke, second one (those who are affiliated with Nippon Iaido Kyokai) regard Takada Gakudo as their head teacher.

In the ZNKR federation (Zen Nihon Kendo Renmei, one of the largest federation both in Japan and outside Japan) there are two lines representing the Muso school. The current soke for Muso Jikiden Eishin ryu is Fukui Torao (21st master), and the last soke for Muso Shinden ryu was Nakayama Hakudo with no official successor.

An iaido Division was formed within The All Japan Kendo Federation (AJKF / ZNKR) in 1956. In 1969, the AJKF introduced the Seitei Gata curriculum of seven kata (techniques or forms) for iaido (全日本剣道連盟居合). These seitei kata, or seitei iaido, were drawn from several of the major traditional sword schools, including Muso Jikiden Eishin-ryu and Muso Shinden-ryu and Hoki Ryu.

In 1980 three more kata were added and then two more in 2000, thus increasing the seitei iaido (seitei kata) curriculum to the current twelve.

These twelve seitei kata are now standardized for the tuition, promotion and propagation of iaido and as a result, seitei iaido has since become the most widely recognized form of iaido in Japan and the rest of the world.

Here at Agassiz Dojo in addition to the koryu's traditional kata, we also place a strong emphasis on learning and mastering the 12 seitei iaido kata.

The term "Iai" is taken from the Japanese phrase: "Tsune ni ite, kyu ni awasu". It means, "Whatever we may be doing or wherever we may be, we must always be prepared for any eventuality."

The "i" (居) in iaido refers to the existence of body and spirit. The "ai" (合) refers to the adaptability of both to changing situations. The "do" (道) refers to the art being a way of life. Iaido may then be translated literally as "the way of meeting life." It had its beginning in the ancient martial art of kenjutsu. The Japanese Samurai developed iaido into a system of quickly drawing the sword from its scabbard, killing an opponent with one cut of the blade, flipping the blood from the blade and returning the sword quickly to the scabbard. This was the way samurai dealt with surprise attacks. The faster a warrior could draw the sword and cut his opponent, the more sure they were of victory. The swords were razor sharp and even the slightest cut could cause death. The cuts were developed to be several inches long and go two-to-four inches below an opponent's skin, that caused bleeding almost impossible to stop. Many of the cuts were practiced to slice major arteries, puncture vital organs and even sever limbs of the body. The intent was very simply to kill an opponent with one cut. This was the practice of kenjutsu.

Differing from kenjutsu, in iai one practices without an opponent. Both in the seitei kata as well as the more traditional koryu kata, the techniques vary considerably. Kata may start from sitting, crouching, lying, standing, or walking. Every direction of attack is studied: left, right, front and rear, in dark and in light. Sometimes there are external obstacles such as a confined space, which does not allow a normal draw, or perhaps an obstacle hanging from above. The multiple variations allow the practitioner to develop confidence and prepare for any eventuality.

The four fundamental parts of an iaido kata are:

1. Nukitsuke: The initial draw and strike of the sword. Often used to confuse or mortally disable the opponent. It must be smooth, powerful and clear. It embodies the essence of iaido. Though single handed, it should be effective and should make kirioroshi unnecessary. Pulling back the saya with the left hand (saya-biki) is very important to archive a clear, powerful initial cut.

2. Kirioroshi: The primary, vertical cut after nukitsuke. It must be powerful, controlled, and precise. 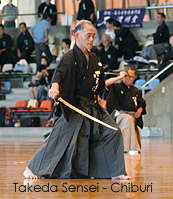 3. Chiburi: A circular or horizontal movement whose meaning is to remove the blood from the sword after the final kirioroshi. Must be smooth and clear using the same principle of "jo-ha-kyu" as found in the two above movements. Must be strong enough to be effective, yet completely controlled.

4. Noto: Returning the blade to the scabbard. It must be graceful and smooth without stopping. The left hand again is vitally important (saya biki, saya gaeshi) to match the saya and the kissaki. Zanshin must be maintained throughout because one must be ready to draw the sword at any moment for another potential attack by the enemy.

A real Japanese sword (katana), practice sword (iaito) or wooden sword (bokken) is used in iaido practice. The sword, often thought to contain the "soul" of the samurai, is handled with respect and good manners. In the beginning and at the end of a training period the student bows to his sword. One does not step over somebody else's sword or touch it without the permission of the owner.

Zanshin - a way of (not) thinking

What is zanshin? It is at the heart of iaido. Simply put, it is a lingering awareness of your technique, your opponent, and a readiness to respond to any further threats. The practitioner must maintain full concentration in the technique while not concentrating too much on the actual performance – to scrutinize the execution after it has been completed, not while in the moment. Finally, it is to be open and ready for any changes in the situation that may occur, and be able to respond accordingly. Until you have actually practiced iaido for a long time, it's difficult to simply explain it in words.

Enzen no metsuke, shortly metsuke, is also of vital importance. It translates as: "Gazing at the distant mountains." It means to focus the eyes at a distance, and is crucial to developing the mental vision needed in iaido.

Saya no uchi - the essence of Iaido

"Saya no uchi" is shortened from "Saya no uchi de katsu", which means, "Victory in the scabbard of the sword." The real intention is: One must obtain victory while the sword is un-drawn.

This seems to be inconsistent for the reason which a practitioner wields his blade, but it is agreeable as the ultimate aim of real swordsmanship. The essence of iaido is a non-combative discipline engaged in for the individual's spiritual cultivation. Through the blade we seek to improve our spirit and become better people, to promote peace and good feeling beyond the walls of the dojo and into our daily lives.

Iaido does not actually mean overcoming an enemy, but overcoming one's own self. The only and the most dangerous opponent in iaido is the practitioner himself. Victory in iaido consists of a forgiving heart and avoidance of fight. Iaido means training toward human perfection. In it there is never a murderous intention to kill another human being. It is said that with endless practice the practitioner learns to understand his place in the universe.

Lost your password? Please enter your email address. You will receive a link to create a new password.