How To Do Various Things

Of course the best source of information is to ask the Sensei or another senpai. To help you remember, this page can offer some tips on how to wear and fold your hakama.

It's also important to learn how to care for your katana or iaito.

Wearing the Keikogi and Hakama

The traditional order for donning Japanese clothing is from bottom to top and from left to right, with inside before outside obviously taking precedence. When putting on the keikogi, make sure to tie the inside and outside ties, located on the left side and right breast respectively, in bows in order to hold the uniform closed during practice.

To learn how to tie your obi, it's best to ask the sensei. There are several different ways, with pictures if you search the web, but really it's just easiest to ask sensei or another senpai.

Lift the back panel and insert the small plastic “tongue” behind the knot in the front straps, so that the koshiita rests above the knot. Take the rear straps and bring them around to the front, where the others cross. Tie a half knot in them, but rather than just going around the other rear strap, go around all the straps. Tie the rear straps in a square knot. Bring the remainder of them around to the sides and tuck them into the other straps and sides of the hakama.

Jewelry such as rings, necklaces, watches, etc should be removed during practice.

How to Fold a Hakama and Gi

Click the picture below to open a bigger image. 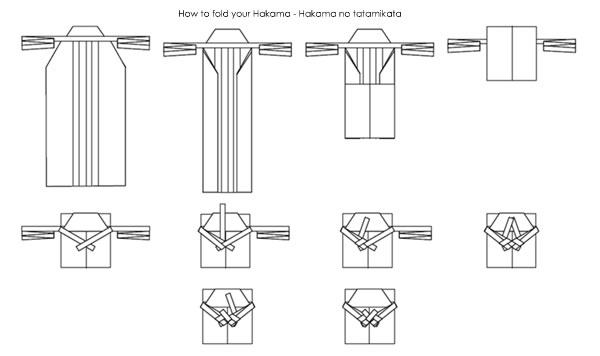 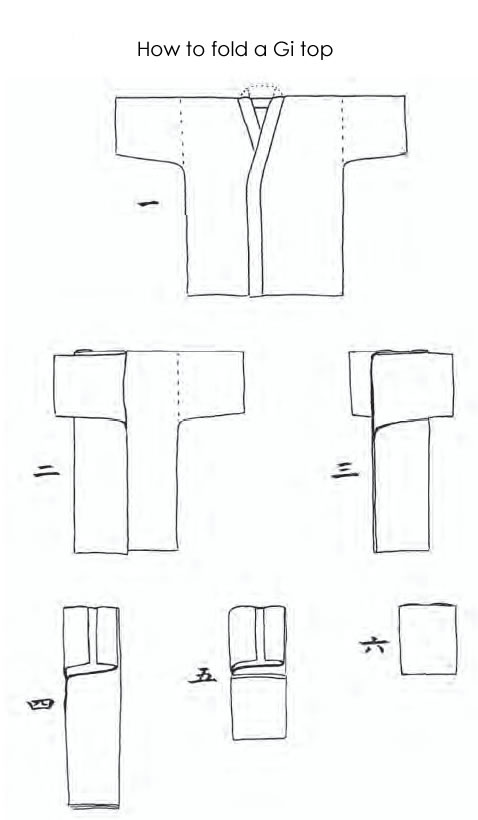 So, you've finally got your iaito, and now it's time to learn to care for it. Assuming you have a dull blade, it is probably made of aluminum and zinc alloy. If that's the case read on. If you have an actual shinken blade, the care is somewhat different with a few added steps.

Please note -- iaito do not need to be religiously cleaned and oiled every training session. You can do this but it's not necessary. Shinken do need regular cleaning because they are made of high carbon steel which oxidizes quickly.

The most important way to keep any katana in good condition is to clean it properly. A basic cleaning kit should contain the following:

Oil: Traditional, Japanese clove oil [not pure clove oil, but actually mineral oil with only 1% clove oil added for fragrance] known as choji abura is best; however, a fine grade of camellia oil, tsubaki abura, may be used as well. Avoid any heavy oil as it will have a tendency to collect inside the saya and gather dust.

Soft cotton cloth: Soft, white flannel works well, but be sure to wash it before using it. Even old tee-shirts can be used in a pinch.

Small container: This is to hold the oil cloth so that it doesn't make a mess inside the cleaning kit. Any small container with a tightly fitting lid can be used: film canisters, clean compact cases, pill boxes with the dividers removed, etc.

Cleaning paper: Japanese washi [rice paper], also known as nugui-gami can be bought which is especially designed for this purpose, but it can be expensive. [Washi should be crinkled prior to use]. Any soft facial tissue that is fragrance and lotion free may be used as a substitute.

There are many different variations on the exact way to go about cleaning a sword. These variations are based either on the teachings of different schools or on the personal preference of individuals. Yet, however much the details may vary, the basics remain the same: remove old oil before applying new. The following is the method that I was taught.

Step 1: Sit in seiza. Place the cleaning supplies in front of you within easy reach and in such a way as that they are ready to use.

Step 2: Hold the tsuka with the right hand and the saya with the left hand near the koiguchi. The blade edge (convex side) should be up, and the saya-gashira (the butt end of the saya) should be pointed diagonally towards the left in front of you.

Step 5: Holding the katana firmly in your right hand, pick up the cleaning paper with your left. Starting at the base, place the mune (the spine) of the blade top of the paper and pinch the paper around the sides of the blade, being careful not to cut yourself on the edges. Slowly draw the paper towards the kensen (tip) of the blade and past it.

Step 6: Repeat step 5 two or three times. Always use long continuous strokes. Never rub the paper up and down the blade as this is dangerous for you and bad for the blade.

Step 7: Continuing to hold the sword firmly with the right hand, pick up the uchiko with the left hand and gently tap it three or four times against both sides of the flat of the blade and along the mune. The powder is designed to absorb any oil remaining on the metal, but it is also abrasive because it is made from the polishing stones that are used in the final stages of sword polishing. A little goes a long way, so it is not necessary to cover the entire surface of the blade. Doing so does not clean the blade any better and only succeeds in abrading and wearing down the metal. Think of it as fine grain sandpaper without the paper, and use it sparingly.

Step 8: Use a new piece of cleaning paper to remove all of the uchiko powder from the blade using the same method as that described in steps 5-6.

Step 9: Inspect the blade carefully to make sure that all of the oil, powder, and other foreign particles have been removed. This is also a good time to make sure that the mekugi is still in good shape and firmly seated in its hole.

Step 10: Using a piece of cloth on which several drops of choji abura have already been placed, wipe the blade several times as in steps 5-6. Be sure that all surfaces of the blade are covered evenly with a thin coat of oil, but be careful not to get any on the habaki.

WARNING: Oil on the habaki will rub off onto the inside of the koiguchi, saturating the wood and allowing the katana to slip too easily from the saya, a dangerous situation. To avoid this problem, do not oil the habaki during routine sword cleaning.

NOTE: Steps 1-6 and 9-11 should be done before and after each practice session.

NOTE: Steps 7-8 are used only on shinken after practice. If a katana is not used to train on a daily basis, keep in mind that it still needs to be cleaned regularly: once a month in dry climates and once a week in humid climates.

Sweat and oils from the hands during training accumulate on the tsuka, eating away at the tsuka-maki and providing a breeding ground for all sorts of nasty little microscopic creatures. To avoid this situation (and still continue to practice), clean the tsuka periodically with a hot, damp towel. Be sure that the towel is not so hot that it will burn the skin or so wet that it will drip water. Wrap it around the tsuka and squeeze it firmly over the entire surface of the handle. Repeat several times, then allow the tsuka to dry thoroughly in the open air before replacing the katana in its bag or carrying case.

Lost your password? Please enter your email address. You will receive a link to create a new password.